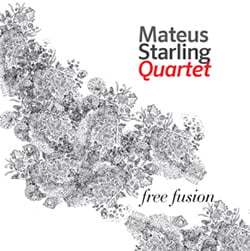 When one thinks of Brazilian guitar, the soft sounds of a classical guitar playing Bossa Nova or Samba usually comes to mind. But, there is a new generation of Brazilian guitarists that are stepping beyond expectations, branching out to the modern Jazz-Rock-Funk Fusion genre and taking Brazilian guitar into new and exciting directions.

One of the Young Lions leading the way on the Brazilian scene is Mateus Starling. The Rio-based guitarist’s recently released album Free Fusion is a tour-de-force of modern fusion-guitar playing. Complete with hard-driving grooves, engaging guitar solos and memorable melodies, the album is sure to turn heads in the Jazz-Fusion world and expand Starling’s audience beyond his native Brazil.

The tunes on the record are a mixture of what one would expect in a Jazz-Fusion record. There are odd-time signature, “777,” harder, rockin’ tracks, “A Cruz,” and slower, funkier tunes such as “Maracafree.” No matter what the musical situation, Starling brings a strong level of creativity to his writing and arranging.

The tracks can all be labeled as Jazz Fusion, yet they each have their own unique voice, separate chapters in the overall musical story of the album. By keeping things interesting, the guitarist is reaching out to the Jazz Fusion audience, while at the same time taking chances in order to plant his personal stamp on the genre. Something that is difficult to do, especially for someone as young as Starling, but the guitarists succeeds in this way on all fronts.

As a guitarist, Starling is an exciting player that isn’t afraid to take risks, yet maintains a high-level of technical accuracy no matter how far or in what direction he pushes himself. Preferring a distorted tone, in a somewhat Scofield-esque fashion, his timbre allows each note to cut through the bass and drums in the background, bringing his guitar to the forefront of the band without being too over the top. Though he has the technical facility to shred up the neck, his brightest moments come when he lays back, focusing on rhythm, melody and textures to create his ideas, going beyond what one might expect from a modern fusion-guitar record.

The track “Triades Mutantes” (Mutant Triads) is a great example of this approach. After bringing the band down to a slow groove to begin his solo, the guitarist uses short melodic phrases to build the band back up again, never digging into his technical chops too much. Instead, he uses timbre and rhythmic motives to build interest. The result is one of the most memorable solos on the record.

Free Fusion is a solid release by the young guitarist, one that is sure to bring much deserved wider attention Starling’s playing and writing. As the last century of Brazilian guitar was defined by Bossa and Samba, with records like this, the new century might be moving in a different direction, a musical movement led by talented young performers such as Mateus Starling.